Placing a firewall in a corporate network puts you in commanding position to protect your organisation’s interest from intruder. Firewall also helps you to publish contents or share infrastructure or share data securely with eternal entity such as roaming client, business partners and suppliers. Simply, you can share internal contents without compromise security. For example, publishing Exchange Client Access Server, OCS 2007 and SharePoint front-end server in the perimeter.

More elaborately, the front-end and the back-end topology is commonly seen in multi-tier applications where the user interacts with a front-end server (Example: CAS server) and that server interacts with a back-end Server (Example: HT server). In this exchange deployment scenario, users interact with a front-end CAS Web server placed in DMZ or perimeter to get Outlook Web Access for reading and sending email. That Web server must interact with the back-end mail server or HT server, but Internet users do not need to interact directly with the back-End HT server. The front-end and back-end server(s) does all these for you providing maximum security. visit Exchange 2010 deployment in different firewall scenario

In this article, I am going to illustrate Back-to-Back Firewall with DMZ. This topology adds content publishing to the back-to-back perimeter topology. By adding content publishing, sites and content that are developed inside the corporate network can be published to the server farm that is located in the perimeter network.

Note: In the production environment, perimeter IP must be public IP accessible from internet. 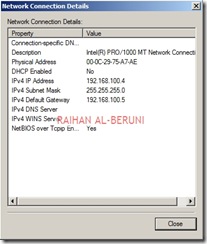 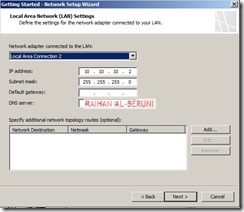 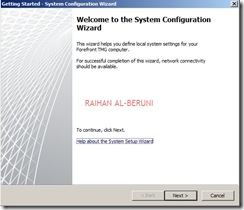 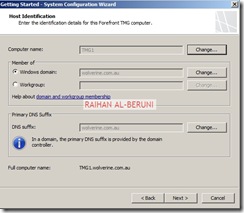 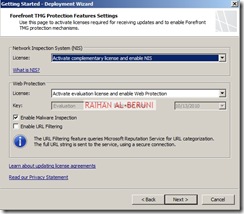 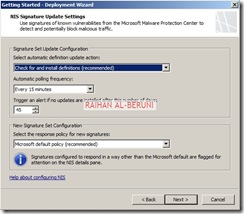 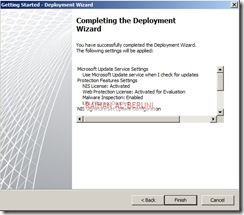 Create connectivity with AD and DNS. 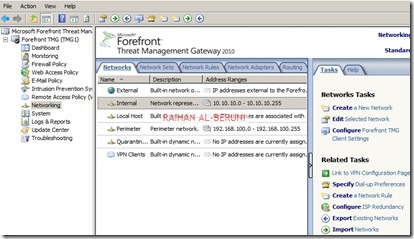 Here, Rules 1 to 4 will created by default while initial configuration as shown below. You have to  create rule 5 and 6 by repeating above steps. 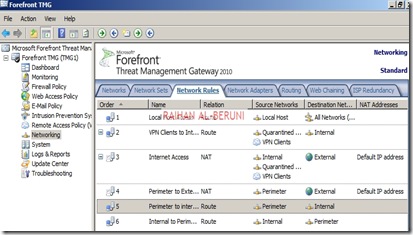 Create an Access Rule allowing all outbound traffic to go from internal to perimeter.

Create another access rule allowing HTTP and HTTPS to go from internal to perimeter and external.

Prepare another Windows Server 2008 x64 computer. Log on as an administrator. Define internal and external IP addresses as shown below. 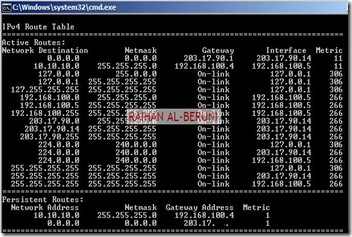 Add Front-End TMG as domain member. Follow same installation and initial configuration options shown in back-end TMG server.  There are only two differences while initial Network Settings configuration that are selecting internal (192.168.100.0/24) and external (203.17.x.x/24) network. Those are shown below. 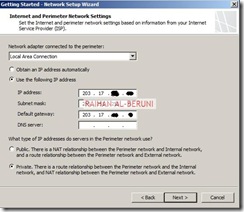 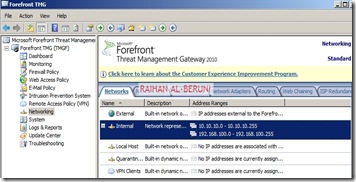 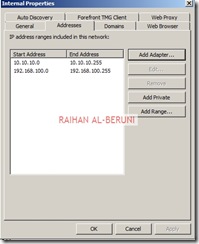 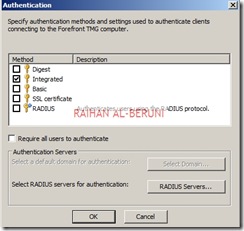 Configure firewall to allow HTTP/HTTPS : Firewall Policy>New>Access policy>Allow HTTP and HTTPS for all users. Do not Allow all outbound traffic to go from internal to external in Front-End Server. Only specific ports and protocols should be allowed. 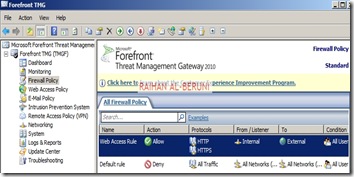 Test Firewall: Log on to a computer in internal network behind Back-End Firewall. Setup Proxy in IE as shown below and browse internet. 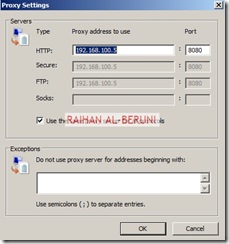 Placing Front-End Server(s) or a member server in DMZ:

One you have completed above steps, you are ready to place any Front-End server(s) such as Exchange CAS, OCS 2007 and SharePoint Servers  in DMZ/Perimeter. You need to import certificates from Enterprise Root CA placed in internal network (behind Back-End TMG) to Front-End TMG server to publish secure web sites such as OWA, Outlook Anywhere or OCS. All Publishing Rules Applied in Front-End TMG server. Here, I am not writing OWA or Anywhere because it would redundant for me to write again as I have shown all these in my previous posting. Visit the links mentioned below.

How to publish Exchange Anywhere in Forefront TMG 2010

How to publish Exchange ActiveSync in Forefront TMG 2010

How to create E-Mail protection Policy in Forefront TMG 2010

This site uses Akismet to reduce spam. Learn how your comment data is processed.